The night in Porto, three centre backs and the art of the ‘second chance’ in football

As a Chelsea fan, the past couple days since the triumph in Porto has allowed the observation of a beautiful irony with the discussions of our squad. The solidification of the ‘youth revolution’, with Reece James’ name now entering the upper echelons of right back discourse, along with the ever-increasing stardom of a future legend in Mason Mount. It provided the perfect reward for the season’s contributions made by Billy Gilmour, Faustino Anjorin, Tammy Abraham and Callum Hudson-Odoi, especially in light with constant rumours of a move away from the Bridge for the last two. It cemented already legendary Chelsea careers for captain Cesar Azpilicueta and N’Golo Kante, while immortalising the new recruits in club history. But with Tuchel’s transformative changes midseason, the greatest storyline probably comes from the revitalisation of three of the most ostracised characters in Andreas Christensen, Jorginho and Antonio Rudiger – all three of which played instrumental roles in securing Chelsea’s inscription on the big ears for a second time. So how should we understand this revival?

I believe that often when analysing players at face value, we often understand their competencies within a certain paradigm. Dependent on how a manager wants their team to play, this greatly impacts how players succeed and thrive within a squad. For example, the expansive nature of Lampard’s Chelsea meant that transitionally, centre backs in a natural four at the back system are demanded to cover larger regions of the pitch. This naturally gives a tendency to sit off and force attackers into the first move when opponents hit on the counter, an approach which fans at home naturally criticise.

Two notable examples include Andriy Yarmolenko’s winner at the London Stadium in a 3-2 loss for Chelsea. Caught in transition, a quick one-two puts Antonio in space and eliminates Christensen from the Hammers’ onslaught towards goal. Rudiger is ultimately stuck in two minds and is not able to pressure Yarmolenko effectively enough to stop a goal. While criticised for showing the winger onto his stronger left foot, the transitional defensive failure of the team as a whole is what puts him in this predicament. 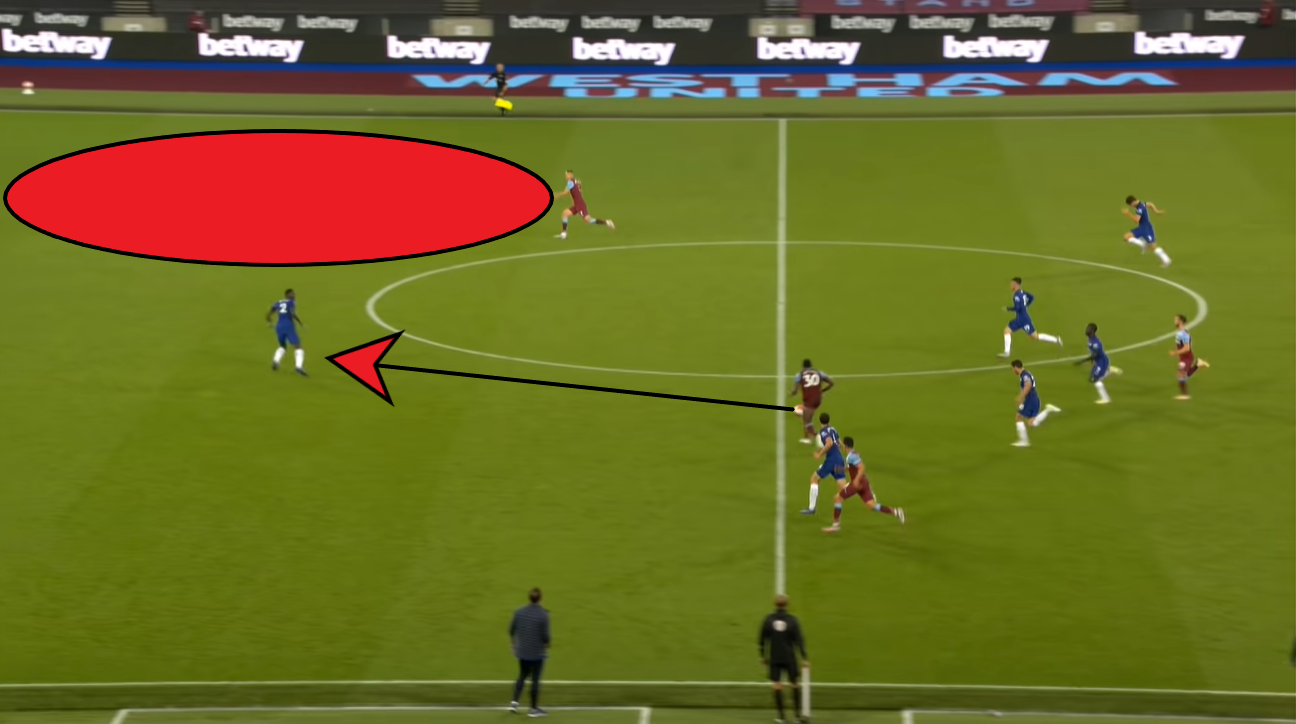 The second is Pedro Neto’s winner in a 2-1 loss at Molineux for Chelsea. While not Rudiger himself, the transitional move from Wolves puts Kurt Zouma on an island where Neto can either try to beat him one way or the other, especially as he is gifted on both feet. Zouma’s best bet is to attempt to hold him up, and Neto ends up scoring – a major punch in the mouth. 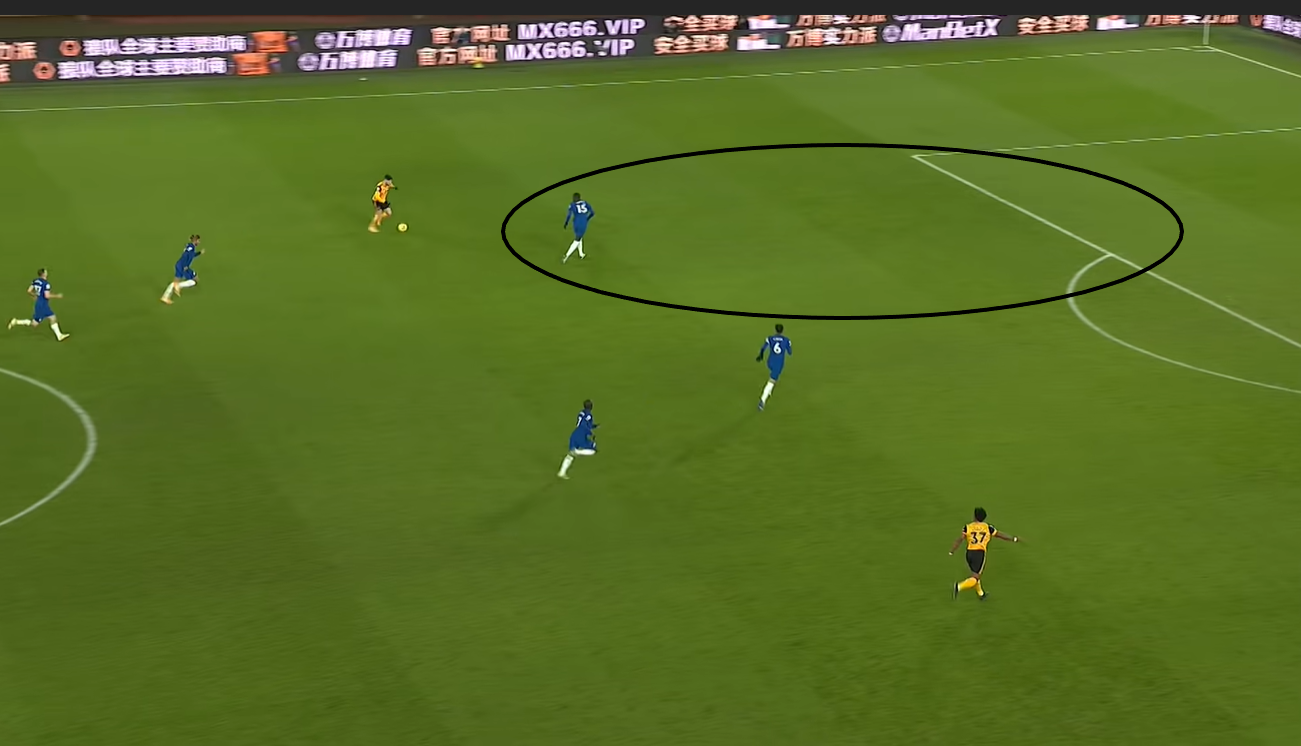 This trouble defending space carries through when analysing lofted balls over the top. Depending on how important fullbacks are to the attack of a side, this proposes an opportunity to exploit the space in between them and the centre back. An example of this is Maddison’s goal versus Chelsea in a 2-0 loss at the King Power. 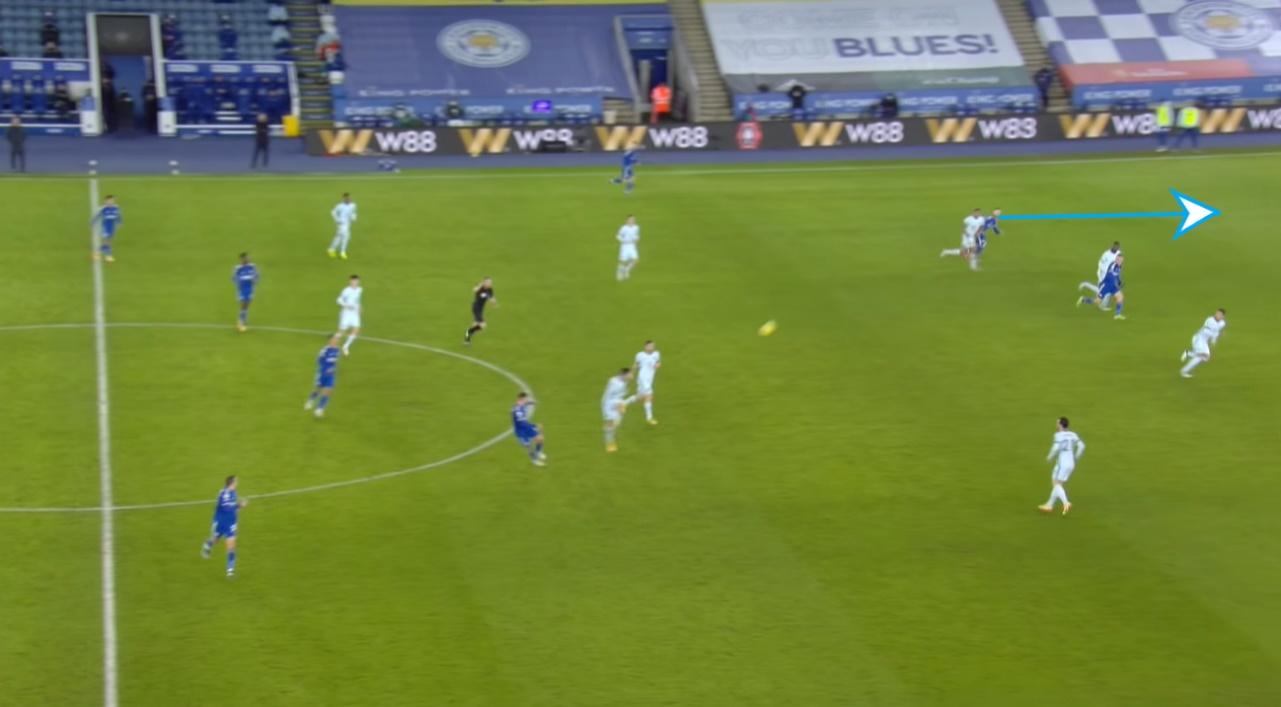 While Rudiger is occupied with Vardy, James must cover Maddison’s in behind, effectively acting as a third centreback considering the threat. But having rushed to recover, he loses track, and a stray header goes to Maddison who finishes past Mendy. Unfortunate, yes, but having resulted in a goal, Rudiger’s weak header made up a large portion of the blame.

The same issue arose for Christensen, whose red card early against Liverpool at home raised questions again about his competencies and ability to play for Chelsea. A beautifully lofted ball by Henderson to Mane forces Christensen into action and he brings him down, a mistake which for many was reminiscent of the biggest criticism of his game. 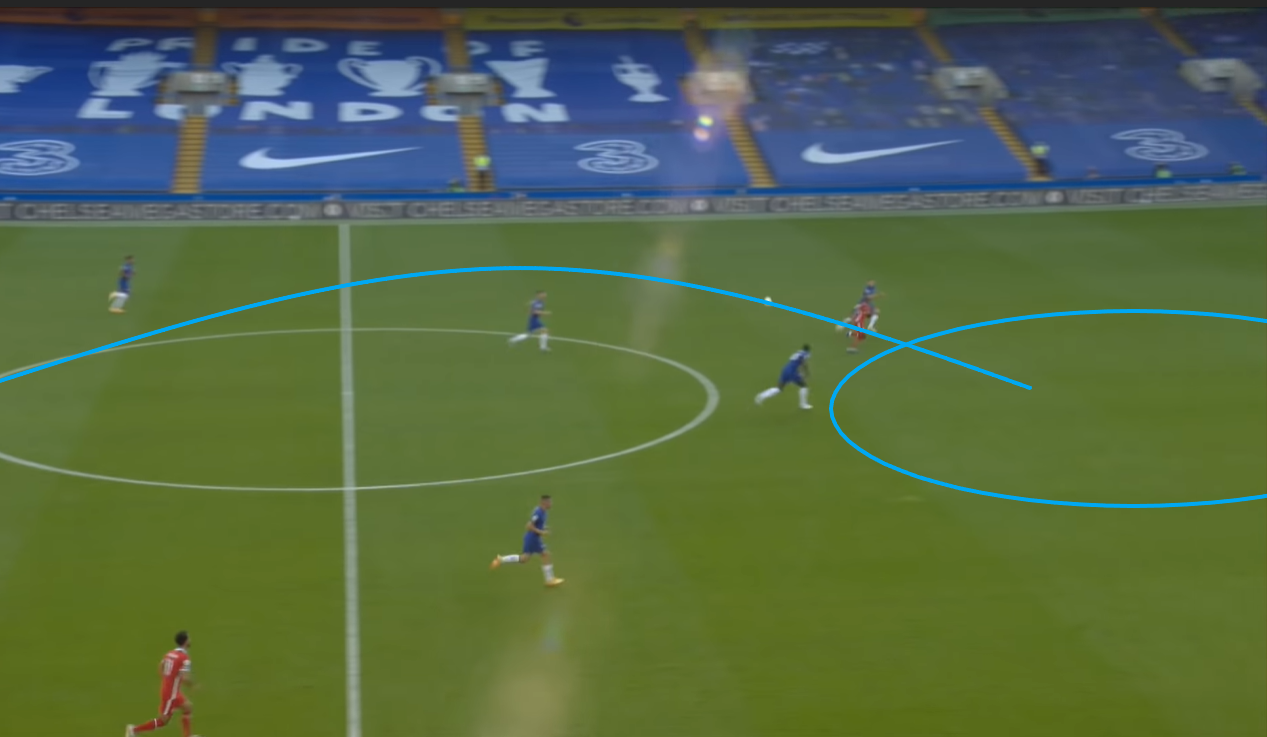 For Jorginho, his lack of physicality in contrast to other defensive midfielders such as Fabinho, Casemiro or much-coveted Declan Rice is also exposed in transitional phases where a more physical presence would be expected to do better. Examples such as against Sheffield United in the 3-0 away loss last year, and the 5-3 loss to Liverpool (below), where failed attempts to engage resulted in goals often saw calls for an upgrade in that position. 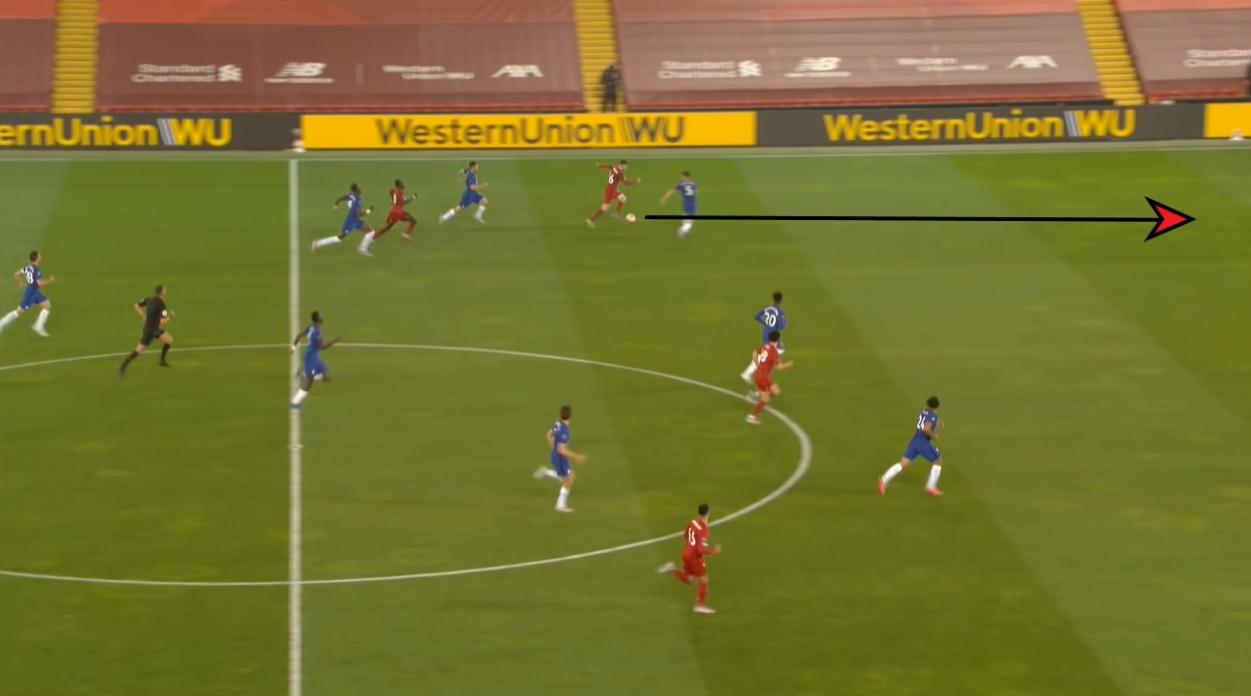 This article is in no way an attack on Lampard but demonstrates a major caveat in how we analyse players. Professional players, especially those worth millions of pounds are extremely talented, facing the best of the best on a weekly basis. Situations where your centreback or defensive midfielder become isolated one on one against any Premier League level winger is not ideal, and even the few indomitable names like Virgil van Dijk and Ruben Dias all have fell victim to the excellent trickery.

So when Tuchel took over from Lampard in January, it must be remarked that his strategy has done extremely well to respect this, employing a system with three central defenders and wingbacks, a structure that has effectively helped get the most of the three mentioned players.

With more players in a defensive setup, Rudiger as a specialised left-centre back helps specialise his game in pressing those who come into his region. As many pundits and coaches have remarked, the five at the back tactic helps close the space each individual defender has to cover, which allows for a more aggressive engagement of opponents. 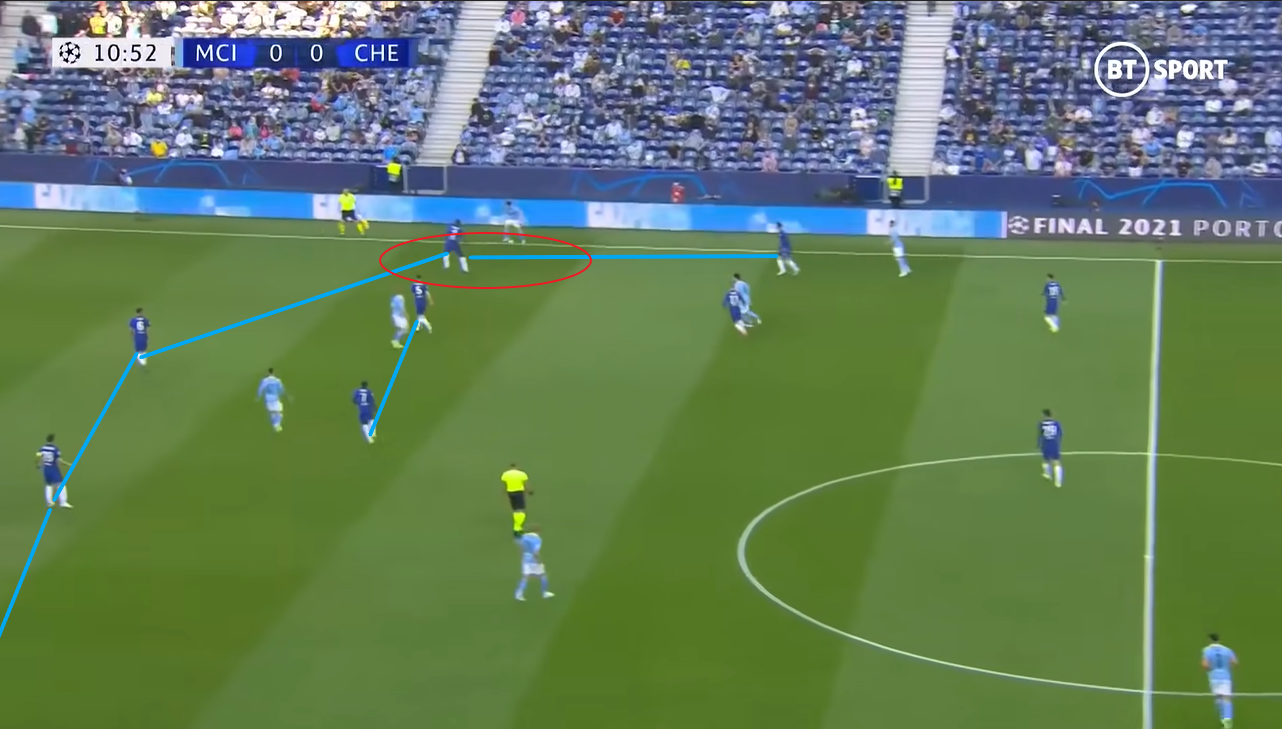 As a very skilled one-on-one defender, he wins the ball off Bernardo – as Bernardo lacks any easy passes due to the organisation of Chelsea’s back line. This is an exact blueprint of how Chelsea made life rough for City, who love to use width to stretch their opponents.

Perhaps the best opening for City in the final was the Foden shot blocked by Rudiger, which serves as another demonstration of just how well this structure works. Kante, James and Azpilicueta press on Gundogan, Sterling and De Bruyne, but some tidy passing allows them to bypass it. But even as this is going on, Chilwell is busting a gut to get goal side of Mahrez at the top of picture. This means Silva and Rudiger know their clear zones to marshal should anything come into their space. It is worth noticing, how as the ball moves, all three uninvolved defenders slowly rotate into the back line. 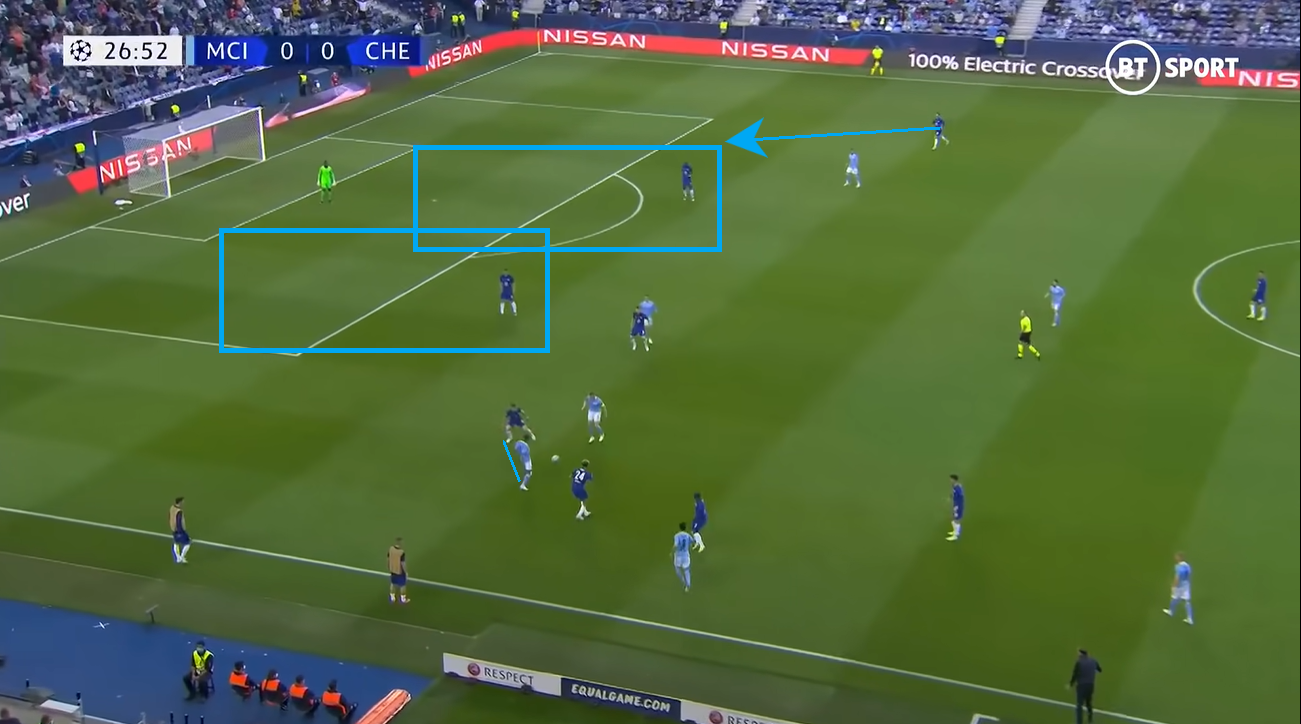 After the pass, we can see how Jorginho’s cover shadow tracks Foden, and more often than not the excellent pass by the extraordinary Kevin De Bruyne might have dropped into his path where he could have made a play on the ball. Even though it beats him, Rudiger and Chilwell have both shifted across, so when Foden takes it in stride and gets a shot off, Rudiger is already in prime position to make the block, using both his athleticism and excellent anticipation. 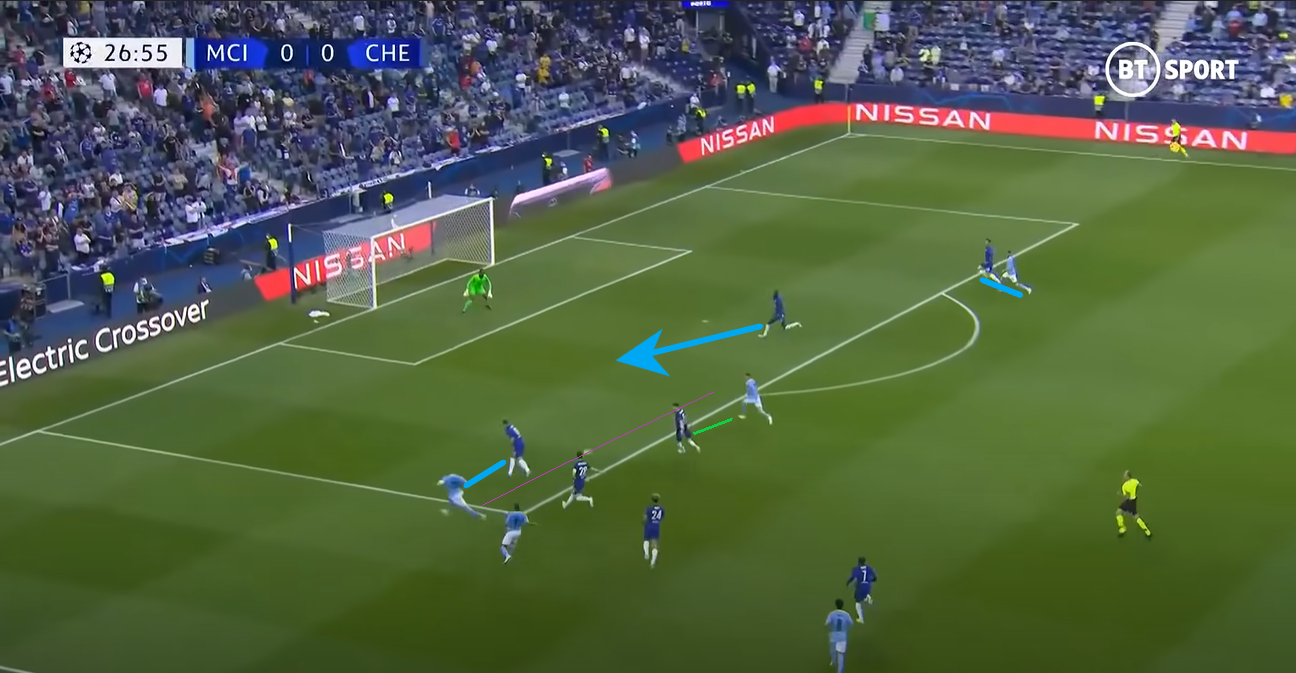 This structure meant that even after Silva was forced off and Christensen stepped in, he fit perfectly into this compact shape, making numerous critical challenges and stopping balls in the box, clearing out second balls. All while maintaining the poise and composure the Brazilian had implemented.

While sometimes credited, Jorginho’s role is often undervalued and unseen, but next to the engine that is N’Golo Kante, his ball recovery ability to cut the circulation of play from opponents, along with his ice-cold composure to resist the press and play teammates in space helped the overall transition game from Chelsea versus City. The Italian’s elite anticipation skills in front of the back line allowed him to avoid getting caught out in a way that put his side in immediate danger, and his high pressing helped hurry City as much as possible. This organisational benefit is major in understanding how best Jorginho fits into an elite European side.

It is worth reiterating that Lampard is not a bad manager for not being able to unlock these side of these players. But it offers an insight into the way we judge players on how they fit into a certain manager’s paradigm. It is important to realise that performances are determined on systems, but fine margins are determined by players. Credit will always go for Tuchel’s masterminding of a new system which squeezes the life out of any opponent but understanding and remedying the struggles that Chelsea defenders (and all defenders) have/had defending in space. Credit must also go to all the players that have capitalised on a new lease of life and have risen to the top. As these three players flipped the script on their importance to the Chelsea squad and played integral roles in the lifting of the colloquialised ‘big-ears’ in Porto, it served as the sweetest possible reminder of why never to write off anybody too soon.