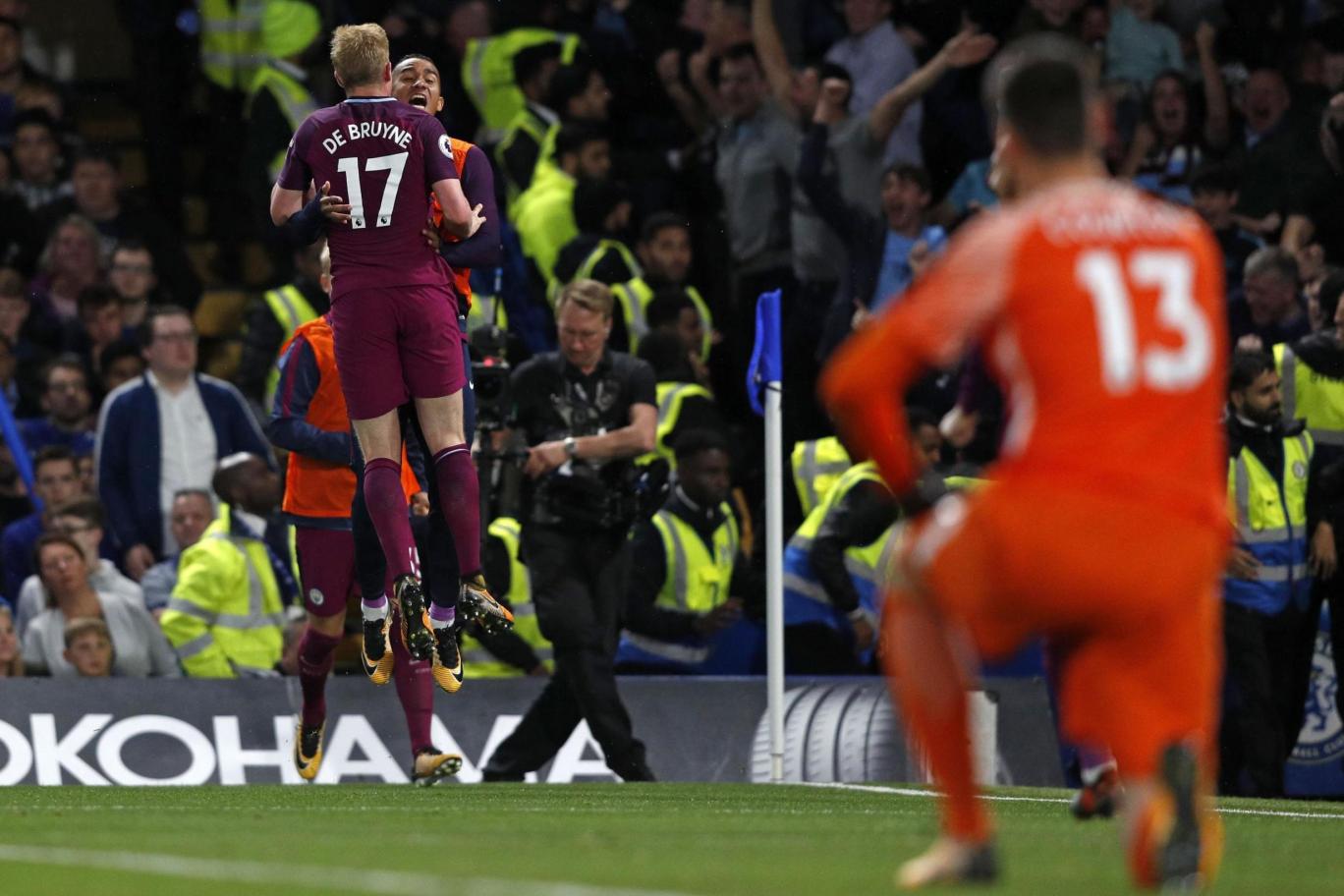 6 games into the 2017/18 season Antonio Conte’s Chelsea faced off against Pep Guardiola’s Manchester City side. Chelsea came into the game as favourites after a dominating European performance away at the Wanda Metropolitano, whilst City were 14 games unbeaten in the league since none other than Chelsea inflicted defeat at Stamford Bridge earlier in the year.

Chelsea started in a mid block sitting just behind the halfway line and letting City dictate possession, only engaging the press when the ball was played into City’s midfield players. Perhaps showing too much respect to Guardiola’s team. Possession for the Blues was hard to come by, however Chelsea started reasonably well with the first chance of the game falling to Morata after 3 minutes Alonso intercepted a loose ball feeding it straight into Eden Hazard. The Chelsea number 10 carried the ball across the field and fed it into Rüdiger, who played it into Kanté in midfield who then swept it out wide to Azpilicueta. The spaniard tarried on the ball for a few seconds, allowing Kanté to make the run from deep, untracked behind City’s back line, the ball was lofted in for Morata who could only head it wide.

However this automatism – automatisms represent behaviours that can be deployed without trigger. Individual automatisms are anchored by repeating them numerous times – is one that we had seen from Chelsea many times, especially after the inception of the 3-4-3. The central midfielder would receive the ball from the centre backs and immediately sweep it out wide to the wingback, if the wingback was under extreme pressure they could simply hook it forward to the striker in this case, Alvaro Morata.

In the the 2016/17 season this worked particularly well between Victor Moses and Diego Costa, however if the right wing-back had time and space they could then find a forward player round the corner, in a pocket of space, or pass it back to the midfielder and make a run to initiate a 1-2. This run would then force a player to track back allowing the midfielder time to perform a switch in play to the opposite wing-back. These simple automatisms born from hours and hours on the training pitch are a specialty of Conte and allow Chelsea to usually break a press. Usually.

Pep set his team up in a 4-1-4-1 with a slight tactical tweak. Silva or Fernandinho would pick up the ball approaching Chelsea’s defensive third at which point De Bruyne would pull out wide and hug the touchline leaving Alonso to deal with Sterling inside the channel, Gabriel Jesus would occupy two off the central defenders in the the back 3 with Sane on the opposite wing occupying the third ‘far post’ centre back in this instance Rüdiger. At that point depending on which side one of Kyle Walker or Fabian Delph were deployed as inverted fullbacks occupying the midfield area, with the other being free on the opposite side. If Silva had the ball it meant that Fernandinho would push forward occupying the central midfielders and vice versa as well as one central midfielder engaging who ever had the ball.

City’s shape showing Kyle Walker (2) as an inverted fullback, and Sané and Silva as options wide and inside the channel

This tactical structure meant that City had an abundance of free options, they could go wide to De Bruyne or Sané meaning the Chelsea wingback would have to close down the wide player leaving a second player in the channel free, however if one of the centre backs came to cover this channel player it left Jesus with space to run into in behind.  Even if Chelsea closed down one side City could play it back to Kyle Walker or Delph playing as central midfielders at which point they would have David Silva, Sterling, De Bruyne, Jesus, Fernandinho, and Leroy Sane in front of them with even Otamendi and Stones stepping forward at times, meaning there was always a spare option and opportunity for City to always retain possession of the ball and keep it ticking over, Concurrently whenever City did lose the ball in the opposition half,  there were so many Manchester City players high up the pitch that their high press won the ball back in seconds, this almost led to City almost scoring as Jesus harried Courtois.

Playing out was less of a problem when Chelsea could go long to Morata, and rely on his at times excellent hold up play, or when the wing-backs could find Hazard down the line and he and Morata could play out in-between themselves.

LONDON, ENGLAND – SEPTEMBER 30: Eden Hazard of Chelsea and John Stones of Manchester City battle for possession during the Premier League match between Chelsea and Manchester City at Stamford Bridge on September 30, 2017 in London, England. (Photo by Clive Rose/Getty Images)

Often they couldn’t hold on to the ball long enough for support to reach them anyway, but when Morata went off after 34 minutes with a tight hamstring. The problem became more evident. When a City attack broke down and a Chelsea defender had the ball City were not always set to press if this happened they would remain high with Jesus closing down the other centre back, David Silva dropping in on the slightly deeper Bakayoko, and Fernandinho and De Bruyne on Kanté and Fabregas.

Rüdiger on the ball with City staying high closing of all options.

Chelsea were still stifled even if they passed out to the wing-backs Sane and Sterling were still spare to press hard at them. At times it seemed like City had 2 or 3 more players.  Willian replaced Morata with Conte possibly hoping that another mobile runner who could receive the ball in the pockets alongside Hazard and get Chelsea up the pitch similar to how they operate in the 3-4-3. However this failed to address the initial problem Chelsea were having which was getting the ball that high up the pitch in the first place.

The start to the second half saw more of the same for Manchester City as they dominated possession. Conte was battling for solutions to counter Guardiola’s tactics and it wasn’t much longer till City scored. Otamendi picked up the ball in defence and spotting De Bruyne peeling off Fabregas and Bakayoko, found him with a pass in between the lines. 2 passes later and the ball was whistling into the back of the net. It had been coming.

Conte had been unable to find a response to the City domination all evening and threw on Pedro and Batshuayi for Hazard and Bakayoko hoping for a late Chelsea fightback, and that’s exactly what he got. Fabregas dropped into the deeper role orchestrating the attacks from his favoured quarterback role, and almost immediately after the change Willian picked up the ball from Fabregas with his back to goal and played a quick interchange with Batshuayi, Willian looked up and for the first time he had spare man on the far side with Alonso and Pedro running in behind, Kanté had also started playing high up the pitch and this allowed Chelsea to press City high and win the ball back to keep their attacks going. However it was a case of too little too late as Chelsea seemed to be playing against a more mature City side compared to the teams of old. City saw out the game taking all the three points.

Chelsea looked to be completely outplayed by Manchester City, last season Chelsea were deadly on the counter soaking up pressure and then launching rapid counter-attacks. However there were various moments that went Chelsea’s way last year,  coupled with arguably Diego Costa’s finest centre forward performance in the game at the Etihad, that led to Chelsea winning the points. However Pep Guardiola was determined to not be beaten again, he bemoaned poor finishing costing them in the previous fixtures with Chelsea, but this time left it not to chance. While Conte was predictably animated trying to spur his team on Pep calmly sauntered across the touchline with a half smile on his face, he knew that his City team had a winning formula, and his confidence in his work paid off as pieces fell into place across the pitch. This was a victory settled by the brilliance of Kevin De Bruyne but won on Gaurdiola’s tactics board long before kickoff.